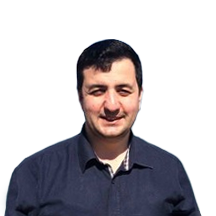 Bekir Çakıcı was born in Istanbul. He completed his primary school, secondary school and high school education in the same city. He graduated from Afyon Kocatepe University Department of Chemistry in 2003. He received his associate’s degree and bachelor’s degree in Foreign Trade and Business. He did his major in Cosmetology in 2014.
Between 2004 and 2016, he worked in various positions at Yeditepe University. He played a role in the foundation of the Cosmetics Research and Production Unit and went on to serve respectively as R&D Specialist and R&D Supervisor. He did research on formulations with Coenzyme Q10.
Between 2012 and 2016, he attended the In-Cosmetics and Cosmoprof cosmetics exhibitions organized in various countries throughout Europe. He participated in trainings, conferences and symposiums in various countries including Italy, Spain, France, Germany and England. In 2015, the liposomal resveratrol raw materials he developed together with İsmail Aslan represented Turkey at the Innovation Zone among the world’s top 60 cosmetics raw materials.
He also provided dermocosmetics training for local and foreign cosmetics professionals. Throughout his career, he took an active role in more than 5000 R&D formulation studies and formulation design of more than 300 finished cosmetics products.
Çakıcı has various oral presentations at cosmetics congresses and award-winning studies. He has been working as a technical manager at the SFA R&D laboratories as one of the founding partners since 2016. Çakıcı is fluent in English. He is married with two children.

All speakers
Time and date


Venue
IFM (Istanbul Expo Center), Yeşilkoy Mah. Ataturk Cad. 5/5, 34149 Bakırkoy / Istanbul, Turkey
THIS FAIR IS ORGANIZED UNDER SUPERVISION OF TOBB (THE UNION OF CHAMBERS AND COMMODITY EXCHANGES OF TURKEY) IN ACCORDANCE WITH THE LAW NO. 5174
Find Us On